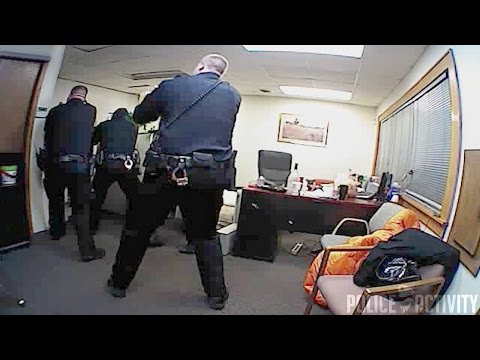 Kirvelay, so unstable he thinks his sister is Satan, hides with a BB gun in a room of his sister’s cleaning business in Columbia Heights.

Police officers cluster at the end of a hallway. They repeatedly shout commands but cannot get Kirvelay to put down his handgun and come out.

The tense exchanges from the Nov. 24, 2015 incident are shown in three Columbia Heights police body camera videos the Bureau of Criminal Apprehension released Tuesday, each about 15 minutes long. They show officers, one with a rifle, firing down a hallway as they scream: “Drop the gun! Drop the gun!”

The image of Kirvelay’s body in the narrow hallway is blurred out.

The new bodycam videos were made public six months after Kirvelay’s death, amid deep debate over the expanding use of police bodycams. Even as the Minneapolis Police Department prepared to outfit all its officers with the equipment, lawmakers were trying to set limits on public access to bodycam video.

The Legislature has sent Gov. Mark Dayton a bill that would restrict most bodycam video from the public. But video that shows a discharge of a firearm or the use of force that results in substantial bodily harm would be still released when the investigation is closed.

The Star Tribune requested the body camera footage from the Columbia Heights Police Department in December. It was released Tuesday.

Columbia Heights Police Chief Scott Nadeau issued a statement when the “no bill” decision was announced, saying the officers feared for the life of Kirvelay’s sister who was being held hostage. There were no markings on Kirvelay’s handgun to indicate it was an air pistol and not a real gun, he said.

Kirvelay, 45, of Montrose, was one of 12 people shot and killed by law enforcement last year in Minnesota. A 13th person died after being hit with a Taser and hitting his head.

In addition to having a serious drug problem, Kirvelay had a long history of mental health problems and arrests. His sisters told officers that he had been committed to some type of facility as a child for repeatedly lighting fires. He was too proud and paranoid to ever seek help for his problems, his sister Denise Larson said in an interview earlier this year. She called him a good man, but a “lost soul.”

On Nov. 24, at about 2:40 a.m., another of Kirvelay’s sisters ran to a Columbia Heights police station to report her brother was holding someone hostage in her office at 710 40th Av. NE.

One video shows two officers knocking on the glass door of the Maid-to-Order cleaning service, then walking in and standing in the lobby of the cluttered office. There’s an argument in the background.

The officers announced themselves and ask Kirvelay to come talk to them. Kirvelay remains hidden in a backroom, though he emerges briefly.

When they start down the hallway and see Kirvelay holding a gun, the scenario immediately shifts. One of the officers draws his weapon, orders Kirvelay to put the gun down and come out with his hands up. They retreat to the lobby area and call for backup.

For several minutes, officers tried to get Kirvelay to follow commands, and to let Larson go. “Mike, what’s going on tonight that’s got you so worked up?”one officer asks.

Then, when officers see Kirvelay holding Larson, with the gun at her neck, they open fire.